By Cavlon News on January 26, 2012 8:56 AM | No Comments | No TrackBacks
We moved inventory from 4 Albuquerque locations to a small industrial park setting just outside Mountainair in such a hurry we did not have time to do much organizing.  Now that we have moved, we are focused on organizing.  We now have seven smaller buidings rather than one really large one.  The 4 outside yards, miles apart in Albuquerque are replaced by about half a dozen outside locations here in the 39 Smith Road industrial park.  The challenge now is getting things sorted and organized by physical location.

Half of one building is being used for office type space.  The other half has small hand carry type items on shelves, organized pretty much in the same manner we had them in 12 rooms in Albuquerque.  Another building stores items that are small or light enough to be rolled around.  These are primarily things that have wheels.  The main warehouse was once a basket ball gymnasium.  The high ceiling accommodates pallet racking for vertical storage and the floor is now concrete so we can run forklifts on it.  3 smaller buildings were originally shops and currently store machine tool type items but are not yet very organized inside. This is also were we test the more industrial type things.

The really big stuff is in the various outside lots.  Items that are sensitive to the environment are covered and tarped. We are currently organizing these areas while the weather is good (sunshine without a visible cloud right now) into areas for air compressors, environmental chambers, hydraulic power units, etc.

Shipping is slower from Mountainair

By Cavlon News on January 25, 2012 7:57 AM | No Comments | No TrackBacks
One of the disadvantages of moving our warehousing from Albuquerque to Mountainair Is that it adds at least a day to shipping time.  In Albuquerque, we were within a few miles of all the trucking terminals, FedEx terminal, Main Post Office, etc. We could get something to any one of these shipping services in a matter of minutes.  While we are now only 80 miles away, it means a 3 to 4 hour round trip which adds a day for just about everything including the post office.  LTL trucking can have even more delay as most carriers do not come this far from their terminal directly.  They send a local trucking company (RAC) to pick things up and bring them to their terminal in Albuquerque.  Depending on schedules, RAC may only come to Mountainair once a week.

RAC theoretically does pickups on Tuesday and Thursday.  This does not necessarily always happen though. We have had a truck show up within an hour or two of being scheduled and then other times it does not come for the better part of a week.

By Cavlon News on January 24, 2012 9:57 AM | No Comments | No TrackBacks
Just when we thought we were drying out enough to work outside again here in Mountainair NM 87036, we awoke to snow this morning.  Fortunately, it was less than an inch and the sun is now poking through, temp is above freezing and it looks like it should disappear by afternoon. It looks like it is still snowing on the upper parts of the mountains to the NE.

At the beginning of the year, we got 4 snow storms in a row with only limited melting between.  Estimated total of 24 inches but it drifted significantly, at one point some drifts over 6 feet.  Yesterday, most of that had disappeared except for the deeper drifts that did not get direct sunlight.  Of course, as all that snow melted, it resulted in a lot of mud anywhere that was not paved or well graveled. 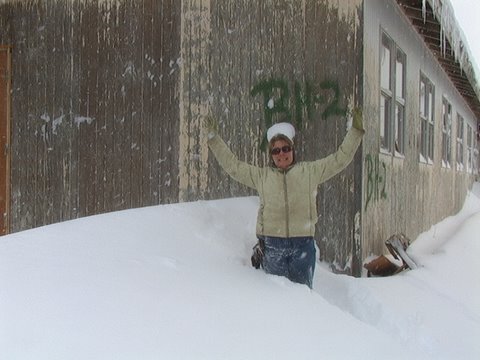 Cavlon has moved from Albuquerque to Mountainair, New Mexico, where we'll spend the next few months settling in and looking for places to put things.
Main Index | Archives | February 2012 »

This page is an archive of entries from January 2012 listed from newest to oldest.

February 2012 is the next archive.